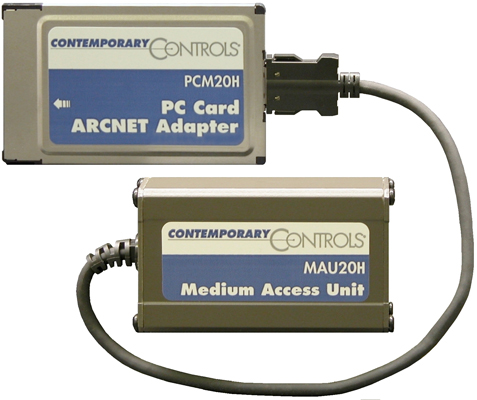 These NIMs followed PC Card standard 2.1 for Type II (5.0 mm thick) cards. The ARCNET transceiver circuitry was located in a detachable MAU (Medium Access Unit) which plugged into the PCM20H adapter. MAUs existed for various cabling media including coaxial and twisted-pair cable, and were all interchangeable with one another. A 15-pin connector with a short cable attached the MAU to the adapter. The PCM20H featured the COM20022 ARCNET controller chip, offering data rates up to 10 Mbps.

The product originally shipped with a 3.5" (9 cm) disk that contained our DOS, Windows 3.x and Windows 95/98 enabler software.

However, a substitute is available for users willing and able to modify their application-layer software. USB22 NIMs also use the COM20022, so they will work (from an ARCNET perspective) just like PCM20H NIMs — once software has been rewritten for the USB22 driver.

Note for laptop users: ARCNET support is available only for USB devices and Windows 2000/XP. For non-USB support on an earlier operating system, use a desktop computer and one of our PCI20U Series of NIMs for the PCI bus.