For those of you who participated in the CTA Awards, thank you for voting us the 2014 Peripheral Product of the Year! We're best known for the BASrouter, but we have an entire suite of solutions for the building automation industry. We presented our portfolio of open building automation and control solutions that allow systems integrators to Integrate and Control and Visualize and Communicate at AHR 2015. 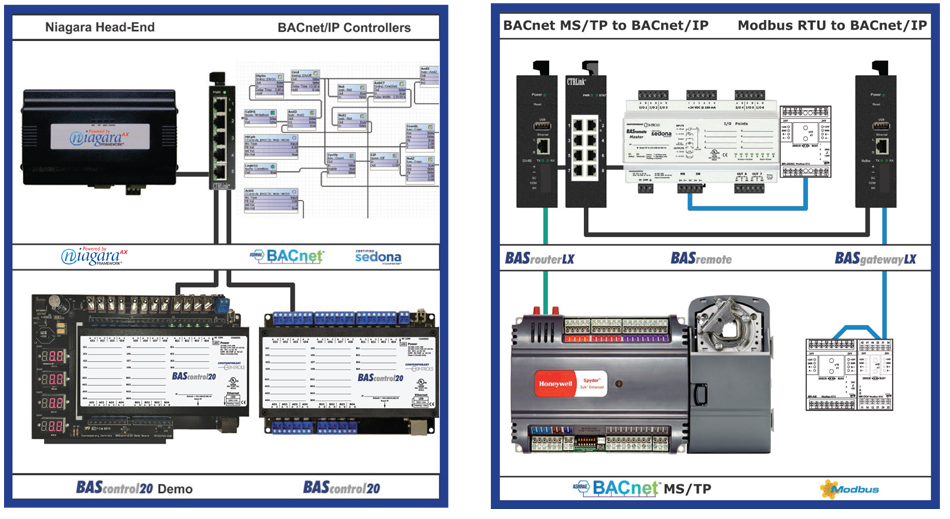 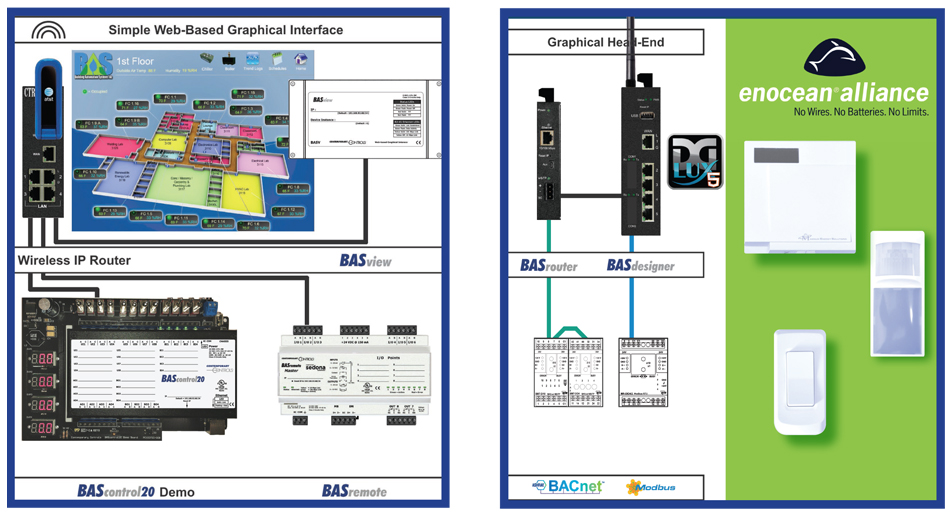 A sophisticated graphical head-end can be found in the BASdesigner. Powered by DGLogik, the BASdesigner has a HTML5 user interface with impressive graphics along with trending, alarming and scheduling. It is BACnet/IP compliant with two resident opto-isolated serial ports that can integrate to Modbus RTU as shown connected to a Cube I/O. Using a standalone BASrouter, a connection is made to a BACnet MS/TP Cube I/O. Two Gigabit Ethernet ports reside in the unit-one with a four-port switch. In addition to wired connections, The BASdesigner has two wireless ports - Wi-Fi and Enocean. The BASdesigner is ideal where a comprehensive head-end is required along with wired and wireless connectivity options.

The year 2015 marks our 40th anniversary as a company and as we reflect on this milestone, we cannot help but marvel at the technological changes that have impacted both the automation systems we produce as well as how companies are now doing business. We have witnessed the migration from standalone controllers to fieldbus-networked controllers to IP-based network controllers. The open-systems movement has helped smaller companies participate in markets once dominated by larger companies with their proprietary systems. The building automation market is a great example with technologies such as BACnet, Modbus and Ethernet for all to use. 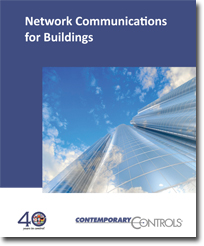 As a company, we have always tried to educate the industry on best practices by publishing application notes, PowerPoint presentations, tutorials and videos. We believe all companies benefit if we effectively educate the industry on the best use of open-system technologies. In that spirit, Contemporary Controls has published Network Communications for Buildings from a collection of prior articles from our Extension and Essentials that were supplements to our print newsletters beginning in 1999. All the articles have been updated to the latest practice so now the best material on network communications can be found in one concise book.

The intention of Network Communications for Buildings is to present the material in a commercial-free format in keeping with the mission of the open-systems movement. If you are attending the AHR show, be sure to stop by Booth 3531 to collect a copy of Network Communications for Buildings. Following the show, electronic copies will be available on our website.

Finally, to all our customers, thank you for 40 successful years. We look forward to continuing our mission to bring you innovative solutions backed by outstanding customer service.