Contemporary Controls has several new open standard, building automation networking solutions that were on display at the 2015 Niagara Mini Summit hosted by Cochrane Supply, June 4-5, at the Soaring Eagle Casino and Resort in Mount Pleasant, Michigan. The Cochrane Mini Summit brought together hundreds of manufacturers, integrators and end users from throughout the Midwest to explore the latest solutions available to the Niagara community. Read on to learn more about the solutions that Contemporary Controls presented. 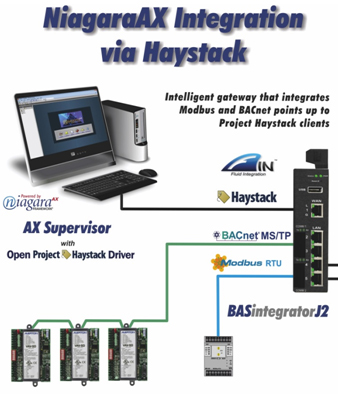 The BASintegratorFIN uses a subset of J2innovations's FIN stack to create a powerful, yet flexible intelligent gateway that integrates Modbus and BACnet points up to Project Haystack clients.

Built on Contemporary Controls' open automation Linux platform, the BASintegratorFIN can discover points and apply Haystack tags to serve up to building supervisors such as Niagara's AX Supervisor. Using an open and free Haystack driver in the AX Supervisor, the AX Supervisor only needs to know the IP address of the BASintegratorFINs in the network for a seamless interface to all points on a job regardless of the type of point. The result is an inexpensive, yet modern approach to building automation where access to structured data is critical. 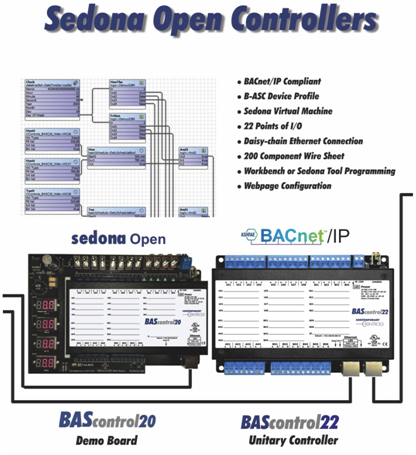 By having an Ethernet connection, the BASC22 can easily connect to Niagara Workbench or a Sedona Tool for programming or to a web browser for configuration. A built-in 10/100 Mbps Ethernet switch allows for a daisy-chain connection to the next-in-line controller or to a building supervisor. Besides having 66 Sedona components from Tridium, it has 100 custom components from Contemporary Controls. These include 48 web components that can be viewed and manipulated by a web browser, and 24 virtual points that can be read or written by a BACnet client. 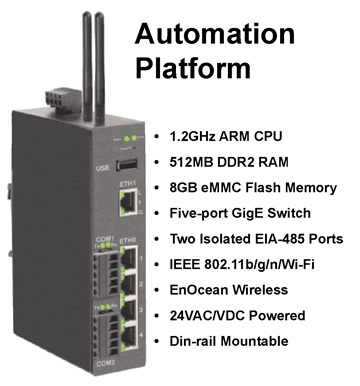 Both the BASintegratorFIN and the BASsupervisorDG5 run on the powerful Automation Platform with a 1.2Ghz ARM9 processor, 512MB RAM and up to 8GB eMMC on-board flash memory. A built-in five-port Ethernet switch eliminates the need for a separate Ethernet switch in the panel. Two optically-isolated EIA-485 serial ports can connect to either BACnet MS/TP or Modbus RTU networks. BACnet/IP and Modbus TCP are supported via Ethernet ports. The unit supports IEEE 802.11b/g/n Wi-Fi and EnOcean wireless as an option. The compact unit operates from a 24 VAC/VDC supply and is DIN-rail mountable intended for standard control panels.

The Automation Platform is intended as an OEM platform for the building and industrial automation industries. Its design is flexible in both hardware and software and powerful enough to serve in a supervisor, integrator or router application. Pre-loaded with a Linux OS, it can be modified by our technical staff to meet just about any requirement. Manufactured in either our U.S. or China plant, it will carry the necessary regulatory approvals for the industry being served.

Automation Platform-DG5 in a Box 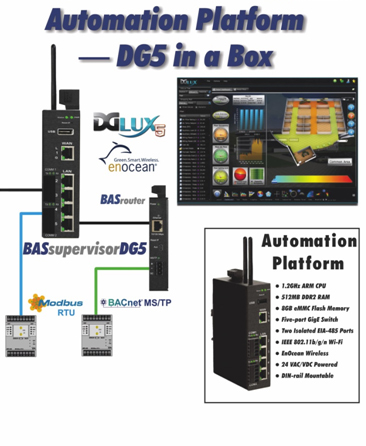 A sophisticated graphical head-end can be found in the BASsupervisorDG5. Powered by DGLogik, the BASsupervisorDG5 has a HTML5 user interface with impressive graphics along with trending, alarming and scheduling. It is BACnet/IP compliant with two resident opto-isolated serial ports that can integrate to Modbus RTU as shown connected to a Cube I/O. Using a standalone BASrouter, a connection is made to a BACnet MS/TP Cube I/O.

For small to medium-sized systems, the BASsupervisorDG5 can function as a stand-alone building controller. Flexibility is achieved through the two opto-isolated serial ports which can be individually configured for either Modbus RTU or BACnet MS/TP. Depending on serial port loading, it is possible to eliminate the BACnet router. With a built-in EnOcean Wi-Fi connectivity, flexibility extends beyond just a wired connection.