Chiller systems can consume 35% or more of all the energy needed for building climate control. Chilled water is used in conjunction with air handler units (AHUs) to cool and dehumidify the air in mid-to large-size commercial, industrial, and institutional facilities. Significant energy cost savings can be obtained by optimizing chiller operation. Contemporary Controls' products were utilized by GreenMediaHD to develop an award-winning system to sequence and rotate chillers as well as adjust flow controls to obtain energy savings of over 20% at a pharmaceutical manufacturing facility in Colombia. The client was awarded a second place for energy efficiency by Andesco Colombia in 2016. Andesco is an association of companies committed to promoting sustainability and social responsibility at the national and international level. 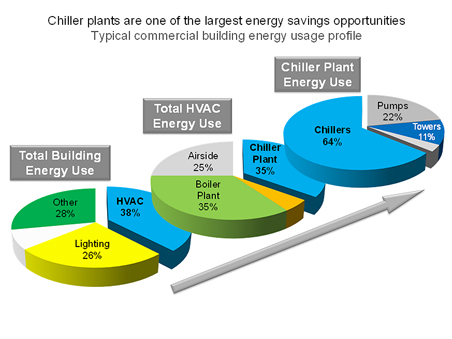 Chiller optimization was accomplished with an industrial computer running GreenMediaHD's Chiller Optimization Program (GCOP). By dynamically resetting the chiller supply water temperature to any value above 44°F, energy savings can be experienced. The program's algorithm determines the optimal times for reset action and then records the savings realized. To prove energy was being saved, the program would periodically turn off optimization and display energy usage to create an energy baseline the customer can observe.

Temperature control was critical for an ISO9001 clean room operation. Four chillers, with one in reserve, served eleven laboratories—each with one air-handler. Contemporary Controls' BAScontrol20 BACnet/IP controllers were used in conjunction with an existing Allen-Bradley (AB) ControlLogix PLC system that controlled the chillers to read, transfer and utilize area cooling information within the facility. The AB controller did not support BACnet so a third-party gateway functioning as a BACnet server as well as an EtherNet/IP client mapped AB points to BACnet/IP. Contemporary Controls modified standard BAScontrol20 units with custom Sedona components to create BACnet/IP clients that would initiate commands to the gateway which in turn transferred data to and from the AB controller. The BACnet/IP client in the GCOP computer accessed the gateway as well. For example, space temperature in each laboratory had to be accessed from the AB controller while air-handler status, space temperature setpoints, supply air setpoints, cooling valve setpoints and chiller setpoints needed to be sent to the AB controller. A total of six BAScontrol20s were used on the job – five dedicated to air-handlers and one for chilled water measurement and communications with the GCOP computer. The BAScontrol20 has eight universal inputs, four binary inputs, four analog outputs and four relay outputs. Network communication between BAScontrol20s, GCOP computer, gateway, and the AB controller was over Ethernet.

Belimo energy valves were fitted to the cooling coils on each of the eleven air-handling units—one per laboratory. These Belimo valves could be operated in any one of six modes; position control, flow control, or power control with or without delta-T control. One BAScontrol20 was assigned to two or more air-handlers. Depending upon energy valve operating mode, the BAScontrol20 could be commanding damper position, flow rate or power usage. In addition, each BAScontrol used physical inputs for air-handler supply-air temperature and supply-air fan proving and the network for space temperature. Cascaded PID loops created the 0-10V cooling setpoint that was sent to each energy valve.

GreenMediaHD could monitor the performance of the system using Contemporary Control's cloud-based RemoteVPN solution. An EIPR-V VPN Router installed at the job site communicated to any number of clients over a secure virtual private network link. GCOP graphics, the BAScontrol web pages, the Sedona program within the BAScontrollers and the web pages served up from the Belimo energy valves were all available for remote monitoring and supervision greatly enhancing project support.

The chiller optimization project demonstrated that existing industrial control systems can be made to operate with technologies intended for building automation. BACnet made the difference. 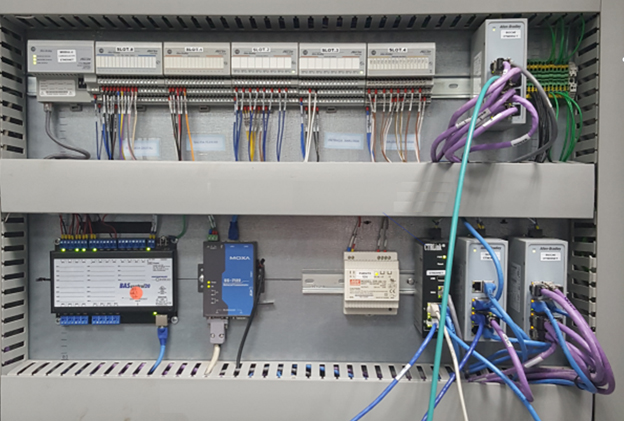 At the top are AB EtherNet/IP remote I/O modules. One of the BAScontrol20 BACnet client controllers is at the lower left. Next to it is the industrial PC which runs the GCOP energy optimizer program. To the right of the power supply is the EIPR-V VPN router.