As part of their customers' maintenance program, SKF's customers use an online surveillance system. SKF has the largest number of installations of this type in operation around the world. Wier says the system is a distributed data acquisition system consisting of hardware and vibration analysis software to monitor machinery around the clock. This is essential to the early detection of developing defects or problems, which if left alone, could result into a catastrophic machine failure.

SKF's previous online system, called the Local Monitoring Unit (LMU) was released more than a decade ago. Wier comments, "It is a fine system, but some of the electrical components are no longer available." With this realization, SKF came forth with a more advanced and more modular data acquisition system in late 2003 called the Multilog Condition Monitoring Unit (CMU). The CMU was designed to replace the LMU, with improved features and performance characteristics. With its release, the company's online system could now reside on an Ethernet LAN. Wier states that the CMU would function with just about any commercial hub, repeater, or switch as part of its network. "However, we needed a device that would operate well in an industrial environment," explains Wier. He says SKF researched various suppliers of Ethernet switches and found Contemporary Controls, a manufacturer of networking equipment in Downers Grove, Illinois. Wier and the other SKF engineers were pleased with the features of Contemporary Controls' new five-port Skorpion Ethernet switch (the EISK5-100T). Although the market segments for SKF's online systems are vast, the EISK5-100T has only been utilized in the Pulp and Paper and Mining segments.

In the past, the LMU employed an RS-485 LAN with a proprietary communications protocol, which for installations larger than 10 LMUs and long cable lengths (up to 6,000 ft. of shielded, twisted-pair cabling), is troublesome to set up. The reason being is the nature of the RS-485 LANs, and the need to use resistive terminations in order to equalize any impedances caused by long cables.

Wier says the RS-485 in the LMU was implemented using a unique FM/Manchester-encoding scheme, along with a bit-oriented protocol, using two discrete frequencies-22 kHz and 448 kHz. "It was chosen because it had better noise immunity," explains Wier. Furthermore, the proprietary protocol made it difficult if not impossible to use most off-the-shelf transceivers and protocol analyzers because they couldn't see or interpret the signals. And converting to another communication medium like fiber optics wasn't simple. "Actually, we did do it," says Wier, "but it was tricky to get it to work and it required extra circuitry. Again, the problem was that not all devices off-the-shelf would operate. Also, few companies manufactured RS-485 to fiber optic transceivers. The CMU made it easier to use fiber optics, since 10BASE-T to fiber optic transceivers are readily available off-the-shelf." 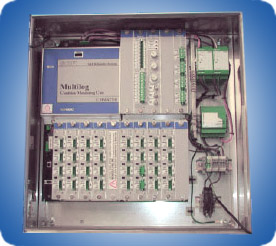 The Advantages of Ethernet

With the CMU, SKF engineers witnessed the many advantages of Ethernet technology. The list of advantages exceeded their expectations.

Wier continues by saying that for those companies that have downsized, condition monitoring via online systems becomes priceless because individuals do not have to walk out and retrieve the data by hand, since the data is automatically collected. "A single online system with 32 channels can save nearly four hours daily-two hours to walk the route with data collection twice a day." The CMU is most valuable when data needs to be collected in extreme hot temperatures or in dangerous areas (exemplified by the dryer section of a paper machine) and therefore, plant personnel do not have to be exposed to these circumstances.

The Skorpion switch addresses a key issue-convenient mounting in control panels where DIN-rail space is at a premium. Office-grade equipment is intended for desktop operation requiring a separate power supply that needs to be powered from a 120 VAC outlet. This usually means a shelf must be constructed to mount the unit and a duplex receptacle to be installed inside the control panel. This device is intended for sub-panel mounting and can be powered from the same control transformer that is used to power the other equipment in the control cabinet, making installation neat and reliable. According to Wier, this switch helped to define the level of success for the CMU. The Skorpion switch is shown inside the CMU. 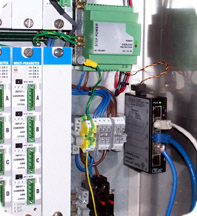 Generally speaking, the installation scenario will differ. Figure 1 is a diagram for a typical installation on a paper machine. Wier states that the length of a paper machine can be as long as a football field and as tall as a three-story structure-meaning that the overall length of the LAN can be 500 ft. or more. The switching technology of the EISK5-100T makes it easy to not only daisy-chain CMUs, but accommodates this overall LAN length with the 100 m segment restriction of 10BASE-T.

The EISK5-100T switches can be mounted inside the CMU or outside the CMUs in a separate enclosure. (Enclosures are designed to withstand harsh environments, particularly the hot and humid areas surrounding the machine.) Wier says CAT5, CAT5e, or CAT6 cabling from the RJ-45 connectors on the CMU motherboard are used to attach to the switch. Lengths are three ft. 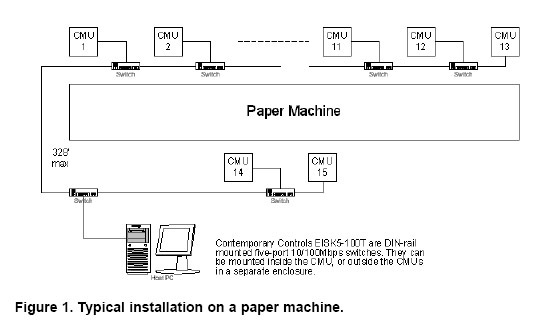 In case the switch is servicing multiple CMUs, the switch can reside in a separate enclosure. Cable lengths from one CMU to another will be different, maybe a few feet to 50 ft. or more. Wier says that sometimes routers co-exist on the network. "I've seen routers with 10/100BASE-T ports with fiber optics to go from the machine back to the control room. We recommend using a single router between our CMU installation and the rest of the plant network."

Multiple host PCs and multiple client PCs may be positioned anywhere in the system architecture. To generate reports, the host PC utilizes SKF's software known as SKF Machine Analyst. Wier says reports can list just about anything; they are customizable. SKF has some built-in report templates that include Last Measurement reports, Overdue reports, History, Exception, etc.

Wier said the company was very satisfied working with Contemporary Controls, especially because Contemporary Controls provided a consistent, reliable supply. "Our systems are heavily-tested, and any changes require complete re-testing-simply to ensure that a modification in one part of the system doesn't affect any other part of the system. In addition, we do implement a just-in-time system for ordering parts and delivering our systems. Accurate quotes on lead times are crucial not only to satisfy delivery requirements, but also to help reduce inventory carrying expenses."