Omron selected J. Boyd Hildebrant & Company, Schaumburg, Ill., to design, construct and pre-wire the equipment into a demo. Omron had employed this company's services ever since 1986 and recognized their expertise in demo design and fabrication.

"Realizing that everyone wants to exchange data almost instantly via Ethernet devices," says Jim Hildebrant, President of J. Boyd Hildebrant & Company, " I sought a manufacturer who continues to make Ethernet increasingly attractive as the major communications interface in many applications. I heard about Contemporary Controls' progress in developing proprietary Ethernet products under the CTRLink® trademark. These products are built for the rigors of the plant floor and harsh environments.

Hildebrant worked closely with the engineers from this Downers Grove, Ill.-based company to determine exactly what was required. "They were very knowledgeable and helpful in getting this project off the ground," he explains. "This extended from the initial call seeking information on Ethernet hubs to acquiring technical specifications. Contemporary Controls ' engineers supplied Hildebrant with the miniature EIM4-10T repeating hub (approx. 1.6" W x 3.1" H x 2.9"D). A hub was chosen rather than a switch in this application for several reasons:

Taking advantage of the EIM4-10T's capabilities, all communications would flow seamlessly between the PLC and the operator interface and the programming panel if connected.

The EIM4-10T is designed as a four-port Industrial Ethernet repeating hub in the CTRLink® family. One port has an extra socket allowing it to be used as an uplink port to connect two hubs together; thereby, eliminating a crossover cable. The hub supports the signaling requirements of 10BASE-T while conforming to the standards for IEEE 802.3 repeater units. The link integrity function is supported-confirming that a functioning adapter or hub is on the other end of the segment. Several LED indicators aid troubleshooting. Besides one common Collision LED, a separate LED exists for each port. Each port has one green LED which indicates link established when solid and port activity when flashing.

Hildebrant and Jeff Meyers, Technical Services Manager of Omron Electronics, agree that the hub incorporates many desirable features including its operational reliability, its size and stacking capability.The training easels have three modes of operation:

The EIM4-10T minimized the chance of error during the three modes of operation and allowed for stacking. Typically, there are from four to eight training easels in a class. The instructor will input information into the programming panel (or computer) that is located in front of the class. The programming panel is connected to one of the repeating hubs. The PLC communicates through the repeating hubs to the LCD display via standard Category 5 cabling. Because the distances were so short, standard Category 5 was all that would be necessary so the training easels could be networked together; back to either the instructor or to one another. Stacking provides tighter integration between hubs. It pays for itself with fewer errors logged during transmissions. And with this capability, Omron wouldn't have to worry about expansion limitations in the future. 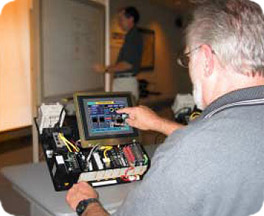 "As for size, this compact repeating hub readily fit into the space available with power and com cables dressing well," explains Hildebrant.

Hildebrant did reduce the amount of wiring by using less cabling to connect the I/O modules to the PLC. The modules were ideal for installation where space was limited. Once installed, quality control tests were carried out to ensure all cabling and wiring had been installed correctly and that both the PLC and the LCD display were functioning properly. He further says that other attributes of the EIM4-10T hub made this application successful. Its 24 Volt power supply was important since most hardened products are available with only DC power. DIN-rail mounting made installation quick and easy.

In all, the hub provided the answer to stackable hardware, allowed additional training easels to get connected to accommodate the number of students in a class and met the compact size demands. Meyers concluded, " The project is an ideal combination of design, construction and equipment."