We call the BAS Remote a versatile building automation appliance since it can function as a BACnet/IP compliant device with universal I/O points; a Modbus serial to Modbus TCP router, and it can serve up web pages. However, the versatility of the BAS Remote has just improved since it now supports Tridium's Sedona Framework. With the addition of a Sedona virtual machine (SVM) in the BAS Remote, the BAS Remote can now execute standalone control schemes while benefiting from the ease of drag-and-drop programming. The BAS Remote retains its web server configuration capability and its ability to communicate over a BACnet/IP network while functioning as a true application specific controller (ASC).

According to Tridium, "the Sedona Framework™ is the industry's first, open source development framework that provides a complete software platform for developing, deploying, integrating, and managing pervasive device applications at the lowest level. It brings the power of programmable control and the Internet down to extremely inexpensive devices. The Sedona Framework distributes decision making control and manageability to any device and brings intelligence and connectivity to the network edge and back." 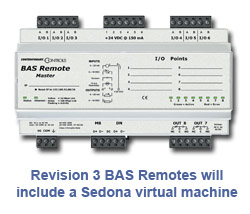 Small devices are not the only devices that can benefit from Sedona. The ARM9 Linux engine in the BAS Remote is certainly not a small device targeted for Sedona, but it fits in quite well with the BAS Remote. The Sedona Framework has a seamless interface to IP networks and can directly connect to Tridium's Niagara Framework – a popular building automation integration platform – via the BAS Remote's Ethernet port using the SOX protocol. Programming is accomplished using either a Niagara Workbench or a soon-to-be-released Sedona Workbench over Ethernet. A rich collection of Sedona control components, including PID loops, are interconnected on a wire sheet using virtual wires. Once the program is developed, it is stored on the BAS Remote and executes when powered up.

The Sedona Virtual Machine will be included in all BAS Remote Master V3.X releases beginning in September 2009. Also included in the 3.0 release will be support for BACnet Change of Value (DS-COV-B), Read Property Multiple (RPM), Foreign Device Registration (FDR), and Modbus register to BACnet object mapping.

For those individuals interested in beta versions of Sedona Framework running on the BAS Remote, contact Joe Stasiek, sales manager at 630-963-7070 Ext 116, or email to jstasiek@ccontrols.com.