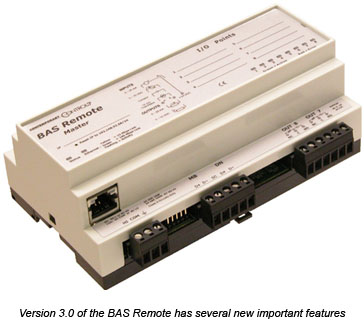 "The new features added to the BAS Remote have generated universal appeal," said Joe Stasiek, Sales Manager at Contemporary Controls. "Many customers are interested in the BAS Remote's new Modbus mapping capability, which has improved the BAS Remote's ability to integrate different protocols on the same job."

The BAS Remote Master incorporates Sedona Virtual Machine (SVM) technology developed by Tridium and compatible with their Niagara Framework™. Using established Tridium tools such as Workbench, a system integrator can develop a control application using Workbench's powerful drag-and-drop visual programming methodology. Once developed, the program remains stored in the BAS Remote Master and executes by way of the SVM. The application can run standalone in the BAS Remote Master or interact with a program in a Tridium JACE supervisory controller over Ethernet. The number of potential applications is only limited by the imagination of the system integrator.

More information, including a new 12-page application guide can be found at here.