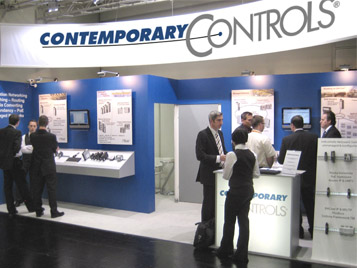 December 2010 - Contemporary Controls exhibited at the SPS/IPC/DRIVES fair in Nuremberg, Germany, November 23-25, 2010. This year's SPS show had an increase in visitors compared to last year, with over 52,000 visitors attending the conference and exhibit halls with more than 1,300 exhibitors. It seems like Europe is experiencing a recovery with visitors discussing impending projects with Contemporary Controls' staff.

The SPS show remains one of the largest of its kind in Europe for the automation industry. It provides an overview of the entire market, from the individual components to complete systems. It is not just an industrial automation show. We received building automation leads as well.

"We'd like to thank the numerous customers who stopped by our booth at the SPS show," said Paul French, EMEA Sales Manager of Contemporary Controls. "It was a great opportunity for us to see our European customers and learn about their needs."

At the show, Contemporary Controls showcased the low-cost Skorpion PoE Injector and soon-to-be-released Skorpion PoE Spltter that taps off 24 VDC from a Power over Ethernet (PoE) port in order to power non-PoE Ethernet devices.  The PoE Injector was demonstrated powering a PoE camera – a popular PoE application.

Contemporary Controls new IP routers generated a great deal of interest. The wired EIPR IP Router with built-in four-port Ethernet switch incorporating an automation industry firewall offers reliability and ease of use.  It is a cost-effective router solution for simple systems. Access to the Internet is via an external cable or DSL modem. The wireless EICR Cellular Router provides the same firewall protection but gains access to the Internet using the cellular network with protocols such as GPRS and EDGE.
Other products being displayed included the company's CTRLink series of Ethernet infrastructure products designed for automation systems. The series includes media converters, unmanaged and managed switches in different configurations to meet most any need.

Finally, the BAS Remote web appliance was demonstrated. It is one of the first products to obtain Sedona Framework™ certification and provides the system integrator a flexible building block when integrating diverse building automation protocols or when expanding the number of points in a building automation system. By supporting open system protocols such as BACnet®, Modbus and Sedona Framework SOX, the BAS Remote series is easily adaptable.

Contemporary Controls will be sure to return to SPS/IPC/Drives in 2011.

Are All USB Cables Created Equal?