The Need for Speed - Going to Gigabit 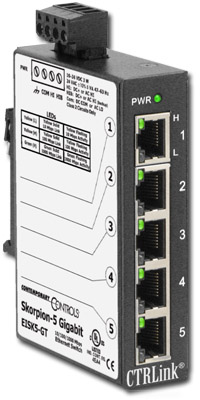 May 2011 - When it comes to Ethernet data rates used with automation equipment, many systems operate successfully at 10 Mbps – the lowest Ethernet speed. This speed is much faster than common fieldbus speeds so this data rate is quite adequate. However, some automation systems require 100 Mbps so having 10/100 Mbps Ethernet switches such as the Skorpion EISK5-100T that auto-negotiates data rate and duplex is perfect for automation systems. In fact, it is our best selling product. So why are we introducing the EISK5-GT that can do everything the EISK5-100T can do while providing another ten-fold in speed performance – one Gigabit – because customers are asking.

There are applications where gigabit speeds are important with the greatest demand coming from IP cameras. With security as the driver, customers are seeking more frames per second so little is missed in surveillance applications. Other customers simply want the ability to handle the higher speeds even if their current automation systems cannot operate at these speeds. It is because most modern desktop computers and laptops come with Gigabit Ethernet adapters. Even if all your automation devices only operate at 100 Mbps, you can use four ports of the switch for 100 Mbps connections and the fifth port as a Gigabit backbone to another Gigabit switch for higher throughput.

The five-port EISK5-GT can operate at 10, 100 or 1000 Mbps by having its speed set automatically through auto-negotiation with its link partner. Physically, it looks almost identical to the EISK5-100T with is compact metal enclosure size and DIN-rail mounting. Like other products in the Skorpion series, it can be powered from a 24 VAC/VDC supply and operate over the industrial temperature range of 0-60°C.

With the advent of Gigabit speed, there was a demand for larger Ethernet frames. The EISK5-GT can support Jumbo Frames up to 9216 bytes. Gigabit speed utilizes all four pairs of the Ethernet cable for communication. CAT6 cable is preferred to accommodate the higher data rate. The EISK5-GT supports auto-MDIX so switches can be cascaded without the need of Gigabit crossover cables which are different from 10/100 crossover cables. With the proper cabling and the EISK5-GT, you are built for speed.

To learn more go to the EISK product page.

The Need for Speed - Going to Gigabit