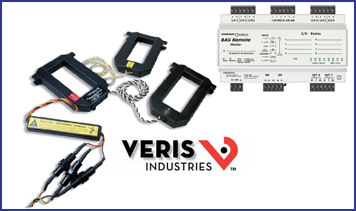 June 2011 - Veris Industries, a leading supplier of power monitors, environmental sensors, and control peripherals for commercial HVAC and energy applications, has published an application note that explains how the BAS Remote can act as a Modbus-to-BACnet IP gateway for the Veris Enercept Energy Meters.

As stated in the Veris application note, "The BAS Remote acts as a Modbus-to-BACnet IP gateway. Multiple Enercept meters can operate with a single BAS Remote, reducing commissioning costs for large projects."

The second approach is to utilize the gateway capability within the BAS Remote Master. Using an off-line spreadsheet, Modbus registers and slave addresses are mapped alongside BACnet object instances. The spreadsheet creates a CSV file which is downloaded into the BAS Remote Master for periodic scanning. The result is that attached Modbus Serial devices can be viewed as BACnet objects.

The BAS Remote Master incorporates Sedona Virtual Machine (SVM) technology developed by Tridium and compatible with their Niagara Framework®. Using established Tridium tools such as Workbench, a system integrator can develop a control application using Workbench's powerful drag-and-drop visual programming methodology. Once developed, the program remains stored in the BAS Remote Master and executes by way of the SVM. The application can run standalone in the BAS Remote Master or interact with a program in a Tridium JACE supervisory controller over Ethernet. The number of potential applications is only limited by the imagination of the system integrator.

The Skorpion Series of Ethernet Switches Just Got Smarter

Essentials: BACnet/IP to MS/TP Router or BACnet MS/TP Repeater - What is Best? (PDF)