Over 100 engineers from over 30 companies met in Atlanta, GA this November, which is the largest PlugFest to date.

"The environment is very friendly and it provides us with a neutral setting to test the interoperability of our products with BACnet devices from other vendors," said Bennet Levine, R&D manager at Contemporary Controls. "This allows us a unique testing opportunity that results in improved product performance."

As is often the case during diagnostic testing, the debate of hubs vs. switches was discussed.

Generally, Ethernet hubs are used at PlugFest to allow software developers to use network sniffing tools such as Wireshark to analyze BACnet messages sent over Ethernet. Hubs are preferred over switches for diagnostic testing because hub ports will repeat the same message received on one of its ports. A diagnostic tool connected to any unused hub port can view all the traffic sent over the network. A switch will restrict port traffic and cause a diagnostic tool to fail to see messages except for broadcast messages.

However, using a hub means the developer is without the many features of a switch, such as the ability of all connected stations to operate at different speeds and duplex.

Contemporary Controls has a solution which was used by its developers and several other vendors. The Skorpion Diagnostic Switch has all the features of a switch but it does not learn, which means that it floods all ports with a message as if it were a broadcast message. This allows a diagnostic tool to be connected to any unused port to see all traffic. If more than five ports are needed, Diagnostic Switches can be cascaded with no loss of data. Another advantage of the Diagnostic Switch is that all participants in the PlugFest can connect at the data rate of their equipment with no concern for other participants' data rate. 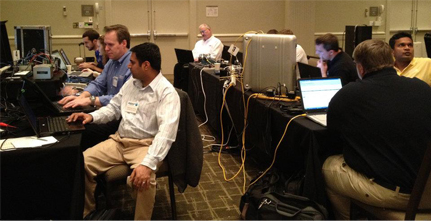 In addition to using the Diagnostic Switch, the new BASview, a stand-alone, embedded, web-based graphical interface for building automation systems, was tested at the PlugFest. The BASview was used with various BACnet server devices and was accessed by a web browser to provide client functionality to any BACnet/IP or Modbus TCP system.

The BASrouter was tested with several MS/TP devices. The BASrouter will support three-way routing between BACnet/IP, BACnet Ethernet and BACnet MS/TP. Any two or all three protocols can be routed. As an aid to troubleshooting, a diagnostic page will display the number of messages received and sent for each of the protocols supported.

The BASremote and a new Ethernet field control device also were tested with several BACnet clients.