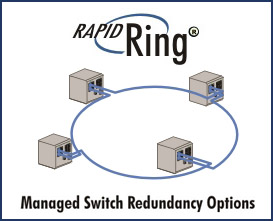 February 2012 – Contemporary Controls has released a new video that demonstrates how a 100-unit Managed Ethernet Switch network will continue to communicate after a cable break in the ring, thanks to RapidRing® technology.

RapidRing is a proprietary ring network technology from Contemporary Controls that can provide recovery from a single cable break within 300 ms. The ring must specify one of its switches as the master to manage the backup link. When a cable break occurs, the master invokes the backup. Once the cable fault is repaired, the nearby switches notify the master which then restores normal operation by disabling the backup link. RapidRing supports multiple rings and can use either copper or fiber cable for the ring connections.

In the video demonstration, 100 managed switches, each with two ring ports, are connected in a ring topology. To simulate a high-traffic situation, four Ethernet adapters in a PC introduce traffic to non-ring ports and expect echo responses from four other Ethernet adapters in a second PC. Communications status is displayed on the Traffic Source computer. In addition, a NuStreams tester generates intensive traffic through just two pairs of ports. Its status appears on a Packet Stats computer.

The Ring Test Computer pings a Target device, a managed switch, and monitors the round trip delay.

In the video demonstration, when a cable is broken, viewers will see the RapidRing response. Viewers can also see how SwitchInfo, a free program from Contemporary Controls, can be used to discover all the switches on the ring.