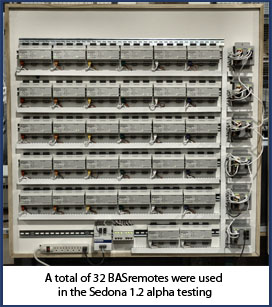 August 2012 - Contemporary Controls has been partnering with Tridium on alpha testing their 1.2 release of Sedona Framework. During this phase the two companies have been exchanging hardware and software in constructing a test bed for system development. Contemporary Controls is using the BASremote – a freely-programmable BACnet controller that requires either a Sedona Workbench or Niagara Workbench tool for programming. Release 1.2 involves changes in the Sedona Virtual Machine (SVM), manifests, kits and the Niagara and Sedona workbench versions. Initial testing is completed and at this point in development, we are seeking customers interested in becoming beta sites for Sedona 1.2. Beta sites will work through Contemporary Controls and any issues discovered will be communicated to Tridium by Contemporary Controls.

The Sedona 1.2 development work allowed Contemporary Controls to greatly improve the speed of the BASremote's SVM when accessing components on a wire sheet. In addition to SVM speed-up, the following changes were provided by Tridium.

Off-line application development – as part of off-line programming enhancements, wire sheets can be developed using just a workbench tool. Once a program is developed it can be sent to the target device – in this case the BASremote – for execution.

Device simulation – also part of the same off-line programming enhancements, the target device can be simulated on the workbench tool allowing the system integrator to fully test the application before installation at the job site.

Sox gateway – a Niagara user using Niagara Workbench and editing a wire sheet on a Niagara platform station can now drill down to a Sedona wire sheet for quick changes with ease.  This is a convenience feature for Niagara platform users (JACE or Supervisor). This feature also simplifies the management of Sedona device files (kit, manifest, PAR, App) by allowing these files to be downloaded and stored on the JACE or Supervisor then served to the Niagara Workbench when needed for programming, provisioning and commissioning of devices.

For those individuals interested in the Sedona beta program contact Bennet Levine at Contemporary Controls. You will be sent a single BASremote along with any Tridium software required for your Niagara Workbench tool. We are looking for active sites and not just simple bench testing. Your feedback is important to the program.

Isolating Traffic Through the Use of VLANs