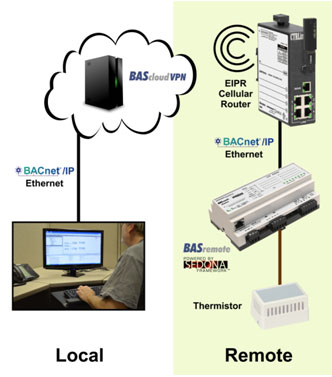 December 2012 - The nearby figure shows a remote monitoring Cloud-VPN demonstration provided by Contemporary Controls at AHR Expo 2013 exhibition in Dallas, TX. A systems integrator working from home needs to view a recently installed building automation system at his client's location. In order to access this remote site, he is going to use a Cloud-VPN to facilitate communications. The Cloud-VPN consists of a virtual private network (VPN) server hosted by a third-party provider. Using his local Internet service, he first opens up VPN client software on his computer which provides a VPN tunnel connection to a Cloud-VPN. A similar VPN tunnel connection to this same Cloud-VPN already exists at the remote site. Using Niagara Workbench on his computer he can then access a Sedona Framework controller at the remote site in order to examine a temperature point of interest. The Cloud-VPN makes the necessary connection between the two VPN tunnels. Once a connection is made, he can service the remote site as if he was physically onsite. In this demonstration, the remote site accesses the Cloud-VPN using a cellular network while the systems integrator simply needs some way of accessing the Internet. The Cloud-VPN provides an effective secure method of remote access without concern for intervening firewalls.

To learn more, read the full PDF and be sure to visit booth #926 at the AHR Expo to see the demonstration.