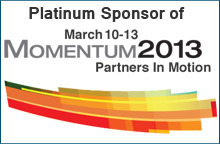 February 2013 - Contemporary Controls will be making it first appearance at Honeywell's 2013 Momentum Conference March 10-13 in Phoenix, Arizona as a Platinum Sponsor. The conference, themed Partners in Motion, provides the opportunity for more than 450 distributors, contractors, sponsors and staff to evaluate top trends in the building automation industry and participate in training workshops. Contemporary Controls will be demonstrating several products from its BASautomation® - Building on BACnet, and its CTRLink® - Ethernet Built for Buildings - product lines that assist systems integrators in attaching equipment to IP networks. Of particular interest to systems integrators is the BASrouter - a BACnet MS/TP to BACnet/IP router; the BAScontrol20 - a Powered by Sedona Framework unitary controller; and the BAScloudVPN - a convenient and secure solution for remote monitoring of building automation systems.

"The BASrouter provides a simple cost-effective method to attach Honeywell Spyder BACnet MS/TP controllers to BACnet/IP without the need of a building controller," said Joe Stasiek, Sales Manager of Contemporary Controls. This allows Spyders to reside on the building's Ethernet network without the need to provide home-run fieldbus wiring to a head-end. An application note is available to explain how this is done. The BASrouter supports three-way routing between BACnet/IP, BACnet Ethernet and BACnet MS/TP. Any two or all three protocols can be routed, thereby allowing the system integrator to mix BACnet network technologies within a single BACnet internetwork. Commissioning is via web pages.

The BAScontrol20, is a 20-point field controller with a direct connection to an IP/Ethernet network. Ideally suited for structured wiring systems, the BAScontrol20 is BACnet/IP compliant with a B-ASC device profile. Having a resident Sedona Virtual Machine (SVM), the unit is freely programmable using tools such as Niagara Workbench or Sedona Workbench. For remote Ethernet I/O applications, the unit can be configured with minimal effort using a web browser. The BAScontrol20 provides a convenient mix of universal inputs, binary inputs and outputs as well as analog outputs. Models exist for both triac and relay binary outputs. The unit is ideal for unitary control or for expanding I/O points in the field via an Ethernet connection.

For system integrators interested in remote monitoring, Contemporary Controls will demonstrate remote monitoring using a Cloud-VPN. The BAScloudVPN consists of a virtual private network (VPN) server hosted by Contemporary Controls. Using his local Internet service, a systems integrator opens up VPN client software on his computer which provides a VPN tunnel connection to the Cloud-VPN server. A similar VPN tunnel connection to this same Cloud-VPN server already exists at the remote site. Using Niagara Workbench on his computer, the systems integrator can access a Sedona Framework controller at the remote site in order to examine a temperature point of interest. The Cloud-VPN server makes the necessary connection between the two VPN tunnels. Once a connection is made, he can service the remote site as if he was physically onsite. The BAScloudVPN provides an effective secure method of remote access without concern for intervening firewalls.

BACnet and the Internet