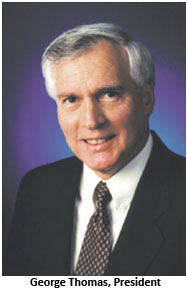 June 2013 - Contemporary Controls' President, George Thomas, was interviewed by Ken Sinclair from Automatedbuildings.com about a range of topics that included the Connected Community concept and Embedded Linux. Below are excerpts of the interview which can be found at AutomatedBuildings.com, as well as a link to George's presentation titled, "Embedded Linux - a Standardized Platform for IP Applications" which discusses the benefits of using a standardized approach to embedded controller design that is supported by an engaged Linux community.

This interview orignially appeared in June 2013 on automatedbuildings.com. Highlights from the interview include:

"Embedded Linux is everywhere. In the consumer market it is in set-top boxes, DVD and Blu-ray players, televisions and a version is in mobile phones. It is now making its way into our building automation industry. We have been using Embedded Linux for ten years now in our IP routers, Managed Ethernet switches, BACnet MS/TP to BACnet/IP routers, Modbus to BACnet/IP gateways and our Sedona Framework controllers. We have a choice of processors with processing speeds up to 1.2 GHz that will work with Linux. Linux is especially useful in IP routing applications where much of the routing technology is freely available to use without royalties. Being part of the Linux community allows us to seek help on issues and to help others solve issues. The Linux community is large and willing to help and many processor manufacturers support Linux."

Sedona Framework
"Sedona Framework was developed by Tridium and resides in the open-source community. Originally, it was targeted as a low-end wireless solution using a technology called 6LoWPAN and some companies are using it that way. However, we found that using it as a wired technology with a Linux OS made sense because Sedona Framework was designed for IP networks. We decided to keep it that way by giving it an Ethernet port and not worry about a fieldbus connection such as MS/TP although work continues on such an implementation. What we did was take a BACnet/IP remote I/O device that was based on Linux and added a Sedona Virtual Machine (SVM) and we ended up with a BACnet/IP controller that can be freely-programmed using a drag-and-drop graphical programming tool such as Niagara Workbench or Sedona Workbench."

Visit our video library to view "Embedded Linux - a Standardized Platform for IP Applications". Look for the full transcript at automatedbuildings.com under the Interview link on the left.