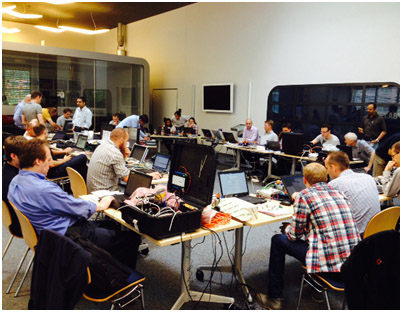 Plugfests are a great opportunity for BACnet manufacturers to test their devices with other manufacturer devices with the main objective being to check for interoperability and other issues. Contemporary Controls tested products within the BASautomation product line that included: BASremote; BAScontrol20; BASrouterLX; BASgatewayLX along with a new product under development.

How Plugfests typically work is manufacturers interconnect their equipment with other manufacturer's devices in one-on-one and large group sessions. This allows software developers to check their code when communicating with BACnet devices from manufacturers that they may not have tested with before. Plugfests also provide essential feedback to standardization organizations as well as to the developer community whose products are tested at the event.

"Plugfests have been great events for us to test our devices for interoperability with BACnet by physically connecting them into a running network between different vendors. These events allow us to identify and solve a perceived connectivity issue between vendors before our products get in our customers hands," states, Bennet Levine, R & D Manager, Contemporary Controls.

More than 60 participants from various building automation manufacturers attended the eighth European Plugfest to test the interoperability of their BACnet products. BACnet engineers from 14 countries used the three-day event to connect prototypes and new developments and to gain valuable experience with the implementation of the BACnet standard. Siemens Building Technology Division sponsored the Plugfest.

In eight Pairing Sessions, Contemporary Controls - together with the 32 teams - tested devices in pairs in a friendly open-minded atmosphere. Another challenge for all participants was the following BACnet/IP and MS/TP Round tables, as well as the All-In Session at the end of the event.

"Plugfests offer a convenient way for BACnet developers to test their BACnet software and BACnet devices with other vendors' products. Also, I want to thank the BIG-EU for the opportunity. It would be very difficult to do this type of testing between multiple vendors without the organizational efforts of the BIG-EU," said Levine. "It's an example of the BIG-EU and the participants' continued commitment for open, standard protocols."

Besides helping manufacturers improve their interoperability, Plugfests facilitate in creating awareness about a standard and can improve transparency on compliancy.

BASgatewayLX Quickly Gets Modbus Data Up to the BACnet/IP Infrastructure