Enhance Your JACE with Routers and Gateways 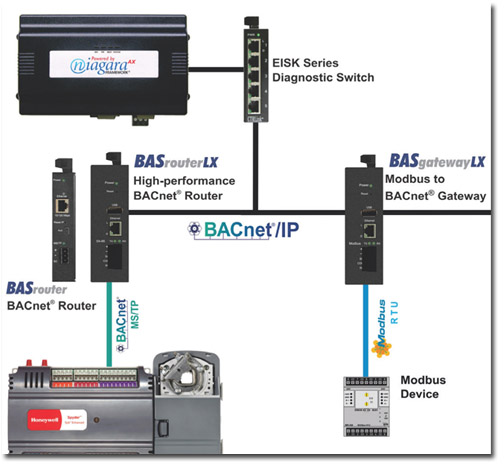 Using the BASrouters to Reduce JACE CPU
While the JACE has the ability to route MS/TP traffic over one of its serial ports, handling the overhead of the BACnet MS/TP token passing protocol burdens the JACE's CPU. This results in increased CPU usage that could be used for other functions and calls for the potential need to change to a higher-powered JACE.

The JACE CPU usage can be decreased by offloading the MS/TP token passing to external BACnet MS/TP to BACnet/IP routers.  This is especially important if you require the JACE to be connected to multiple MS/TP networks.

Both our BASrouter - BACnet® Multi-Network Router and BASrouterLX - High-Performance BACnet® Router provide the solution.  The units offer stand-alone routing between BACnet networks such as BACnet/IP, BACnet Ethernet, and BACnet MS/TP - allowing the system integrator to mix BACnet network technologies within a single BACnet inter-network. In addition, the BASrouterLX provides a high-speed processor, with advanced features that include MS/TP slave proxy support (allowing auto discovery of MS/TP slaves), MS/TP frame capture and storage for use with Wireshark®. Up to 50 BBMD entries can be made.

Using the BASgateways to Configure Modbus Devices
Although the JACE has the ability to communicate Modbus RTU over one of its serial ports, Modbus points cannot be discovered like BACnet points. System integrators need to manually configure each Modbus register for the JACE.

To greatly reduce the time required to configure Modbus devices in the field, our BASgatewayLX has
pre-defined Modbus device profiles that make the configuration of Modbus registers just as quick as configuring BACnet points.

The BASgatewayLX is a Modbus to BACnet® gateway that provides a 10/100 Mbps Modbus TCP or BACnet/IP Ethernet port and an opto-isolated Modbus EIA-485 serial port for Modbus RTU or Modbus ASCII devices. Up to 30 Modbus serial devices (represented by up to 1000 polled points) can share the single Modbus port on the BASgatewayLX.

The virtual routing feature in the BASgatewayLX allows each connected Modbus device to appear as an individual BACnet compliant device which can save configuration time if using multiple identical Modbus devices.

A device profile for each Modbus type device is needed and Contemporary Controls maintains a library of common device profiles. If one is not available, we will be glad to provide it upon request. In addition, custom device profiles can be uploaded to the BASgatewayLX. Using web pages and a resident database of common Modbus device profiles, Modbus data points from Modbus Serial or Modbus TCP devices can be mapped to BACnet objects.

Taking Our Product Innovation on the Road

Did You Know? Using the BAScontrol20 as BACnet/IP Remote I/O

Enhance Your JACE with Routers and Gateways