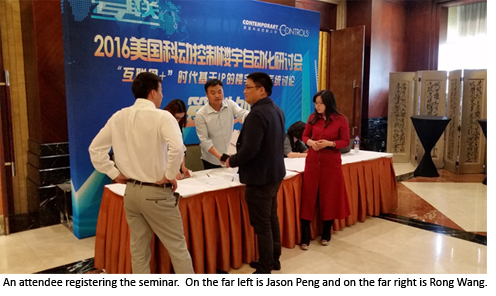 May 2016 - The Germans call it Industry 4.0 but the Chinese call it Internet+. It involves the application of Internet technology to conventional industries. Contemporary Controls (Suzhou) Co. Ltd (CCC) along with its distributor, Bangtech Technology Tianjin, sponsored a seminar entitled Internet+Building Automation in one of the largest cities in China having a population exceeding 11MM. Just like other cities in China you cannot miss the cranes and the ongoing building construction. Many of the commercial buildings incorporate BACnet and CCC wanted the audience-consisting of Honeywell distributors, design institute professionals and professors from Tianjin University-to understand the merits of BACnet as an Internetplus strategy.

One of the success stories that Rong discussed was the Henderson Building which is a BEAM platinum certified building in Shanghai. A total of 51 Contemporary Controls' BASrouters were used to interconnect the 1900 VAV and unitary Spyder controllers located over 27 floors. Anywhere from 24-48 Spyder controllers were assigned to an individual BACnet MS/TP segment along with one BASrouter. The BACnet/IP side of each BASrouter was then connected over Ethernet to one Webs-AX supervisor and only nine soft and hard Webs building controllers. Contemporary Controls' CTRLink Ethernet switches were used to make all the BACnet/IP Ethernet connections.

During the break, Rong demonstrated to the attendees how all the equipment is connected using a demonstration box provided by Contemporary Controls.

Upon completion of the seminar, attendees were invited to attend a dinner with no lack of Chinese food and drink. A good time was had by all.

"BACnet and Numbers" Published in Foundations