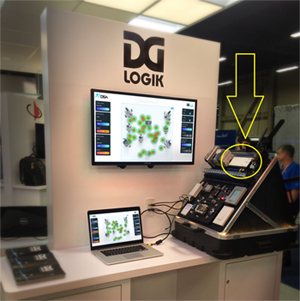 While Contemporary Controls was not able to make it to the Cisco Live show in Las Vegas, DGLogik brought our latest BACnet controller, the BAScontrol22 BACnet/IP Sedona Unitary Controller, and showed off its performance.

Positioned in DGLogik's platform demo box, Dennis Khvostionov, Chief Technology Officer at DGLogik, stated the BAScontrol22 enables DGLogik to directly drive its relays over BACnet/IP to demonstrate the quick response of the controller when combined with the new DGLogik DSA IoT platform. DSA, or Distributed Services Architecture, is an open source IoT (Internet of Things) platform that facilitates device inter-communication, logic and applications at every layer of the IoT infrastructure.

Contemporary Controls' newly released BAScontrol22 Sedona Unitary Controller joins our popular BAScontrol Series which supports both BACnet/IP and Sedona Framework (SOX) protocols via an Ethernet connection. The BAScontrol22 has 22 points including six relay outputs to support multi-stage rooftop units. Using a built-in Ethernet switch with two external ports, controllers can have daisy-chained network connections. A resident web server allows the controllers to be accessible via a common web browser. Controllers in the series support a common core of features and differ only by I/O count and network connections.

Set up and curated by Cisco Systems, Inc., Cisco Live is an event for professionals from around the world to learn more information about the latest technologies of not only Cisco, but also the other exhibitors that attend. Through seminars, webinars and exhibitor showings, professionals are able to learn about the technologies featured at the show.

Custom HVAC and Math Kits Released to the Sedona Community