Round of Applause for the Diagnostic Switch 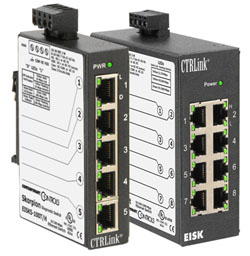 June 2017 - One of our favorite products is our Diagnostic Switch, the unmanaged switch we purposely "broke" so it retains all the features of an unmanaged switch but performs like a repeating hub in that all received messages are flooded to all other ports. We were delighted by the round of applause given to the Diagnostic Switch from users at the BIG-EU Plugfest 2017 in Freiburg im Breisgau, Germany, May 17 – 19. We donated Diagnostic Switches to each participating team to assist in analysis and trouble-shooting.

"Donating the Diagnostic Switch to each team is a way for us to support the Plugfest and make it easier for teams to capture and analyze network traffic," said Harpartap Parmar, Senior Product Manager at Contemporary Controls. "The switches were quite popular and earned a round of applause from the participants."

Skorpion Diagnostic Switches assist the user in troubleshooting Ethernet networks by allowing a network sniffer such as Wireshark® to attach to an unused port on the switch and observe all traffic on the network. Skorpion Diagnostic Switches retain all the features of an unmanaged switch but perform like a repeating hub where all received messages are flooded to all other ports. There are two 5-port diagnostic switches in the series which differ only by the highest data rate supported. The EISK5-100T/H supports 10/100 Mbps networks while the EISK5-GT/H can additionally support gigabit speed. The EISK8-GT/H supports up to eight ports at 10/100/1000 Mbps speeds.

One benefit of switched Ethernet technology is that the switch restricts directed messages to only those ports party to the communication. This improves overall network throughput by not burdening end stations with useless traffic. However, this feature makes protocol debugging difficult because a sniffer (protocol analyzer) tool attached to an unused port on the switch cannot observe any directed messages of interest. In the past, the solution was to change out the switching hub with a repeating hub but with the Skorpion Diagnostic Switch this is unnecessary.

Round of Applause for the Diagnostic Switch