BASview3 is a stand-alone, embedded, web-based supervisor for building automation and process automation systems. Supervisory features include animated graphic screens, dashboards, scheduling, historical trending, alarming, runtime accumulation and email notifications. The BASview3 is totally self-contained, requiring no external PC or software application for its use. It is ideal for medium-sized buildings or processes with up to 1000 BACnet or Modbus points that require an easy and intuitive graphical interface with no licensing requirements. The BASview3 is convenient to install with a compact metal enclosure that is DIN-rail mounted, 24VAC/VDC power input with backup, 10/100 Mbps Ethernet port, and time retention in the event of power loss thanks to a capacitor-backed RTC.

The latest BASview3 firmware (2.09 and later) provides a custom graphics feature. Image files of floor plans, equipment, or custom logos in PNG or GIFF file format can be uploaded to the BASview3 and used in graphic screens. Images can be purchased online from vendors such as ControlPix, images can be created using open source or professional software, or even taken with a cell phone camera, converted to PNG, and uploaded to the BASview3. Image containers in the BASview3 can utilize uploaded images as a background such as a floor plan, or smaller images such as automation equipment or customer name or logo can be freely positioned in the graphic. The BASview3's library of gadgets for displaying and/or controlling point values can be used to freely position over the uploaded image to create a complete and functional graphic of a system. BASview3's HTML5 graphics are easy to create and scale on a variety of platforms such as tablets, mobile phones, or PCs, and can be accessed by multiple users simultaneously from anywhere over the network.

For example, the 3D floor plan image below was imported into the BASview3 as a PNG image file, then several built-in BASview3 gadgets were freely positioned on top/around it and BACnet points were attached to each gadget using the easy and intuitive menu. Graphics can be used for monitoring and/or control of any BACnet or Modbus system. 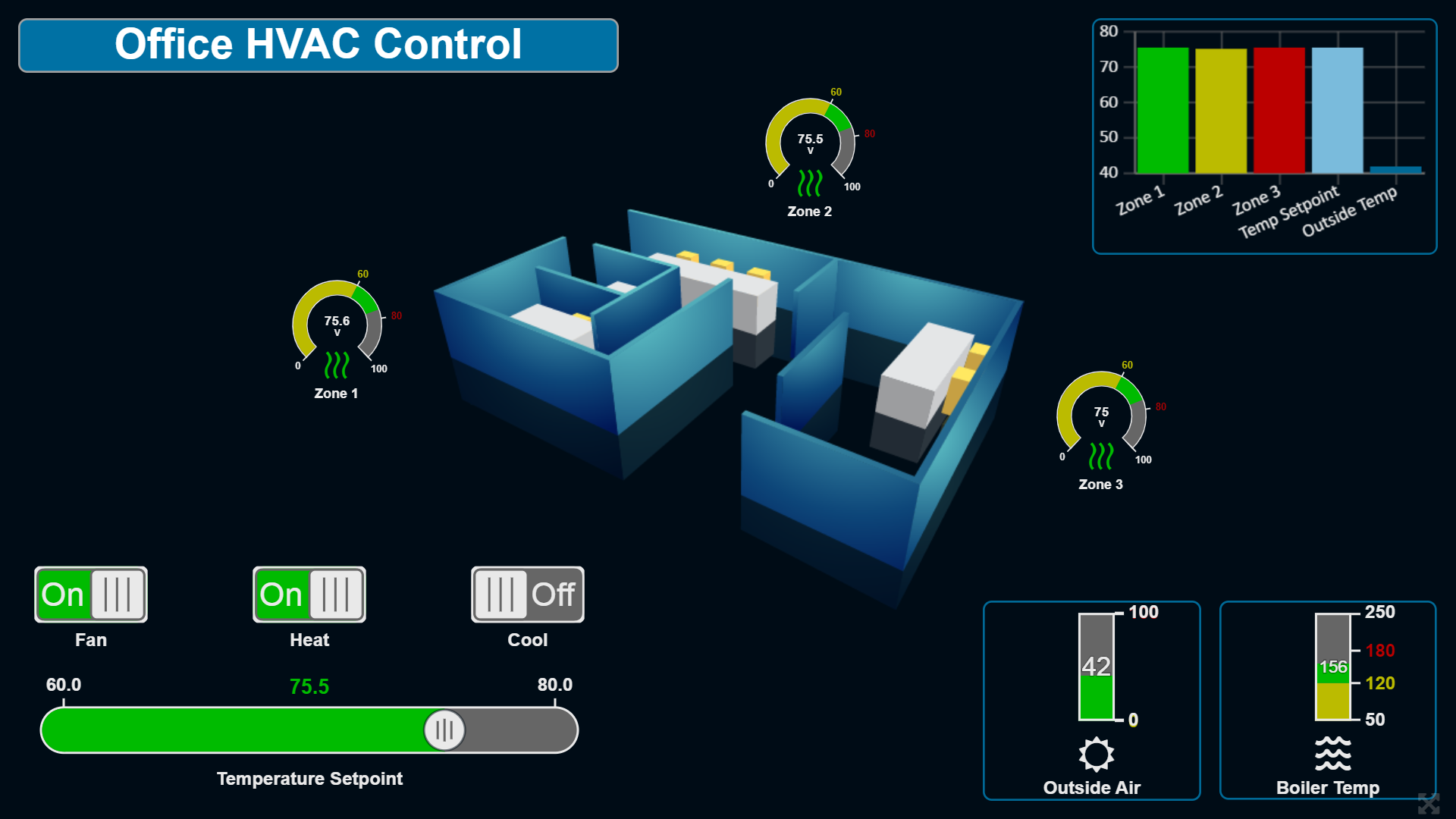 Another graphic example to accomplish equipment monitoring would be to upload an equipment image such as an RTU (Roof Top Unit), AHU (Air Handler Unit), Boiler, or any other equipment type. BASview3 gadgets can be positioned in the appropriate locations around the equipment image to indicate important parameters. The equipment image shown below was purchased from ControlPix and uploaded to the BASview3. The ControlPix image features a detailed equipment-specific depiction with animations on active elements dynamically driven by changes in point values such as an active/inactive supply fan, neutral/red heating element, neutral/blue cooling element, open/closed damper at various positions as well as clean/dirty filter indication. BASview3 gadgets such as a Trend Container, Arc and Bar Gauges are freely positioned adjacent to the equipment image to indicate any current and historical point values of interest. 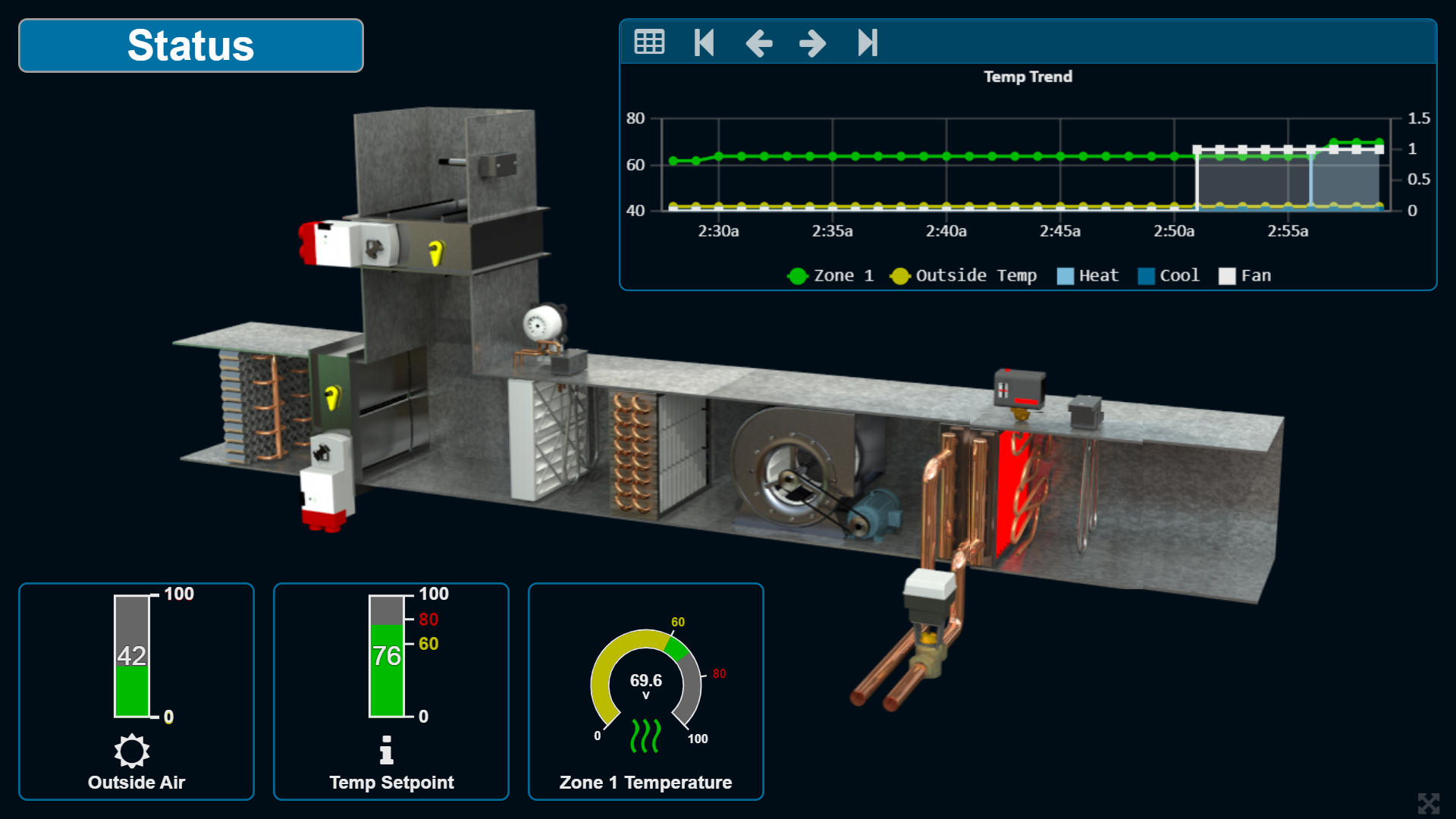 Building Automation During a Pandemic