September 2010 - When attaching BACnet devices to IP networks it is possible that the IP network has been sub-netted through the use of IP routers.  Most IP routers will not pass broadcast messages which are crucial to BACnet's operation. The solution is to incorporate BACnet/IP Broadcast Management Device (BBMD) functionality within the BACnet internetwork. This can be accomplished by enabling BBMD on the BAS Router.

The BBMD concept requires that a broadcast message originating on one subnet be encapsulated into a directed message and sent to all remote subnets since these directed messages will pass through IP routers. Once the encapsulated messages are received on the remote subnets, a BBMD device will decode the message and resend it on its local subnet as a broadcast message. Therefore it would appear that a BBMD device must be present on each subnet in order to provide this encoding and decoding function. However, this is not the case if all the BACnet/IP devices support Foreign Device Registration (FDR).

In the example below, we have two subnets separated by an IP Router. On the right-most subnet is a BAS Router attached to BACnet MS/TP devices. At a minimum, one BBMD device is required to be located on one of the subnets with FDR devices registering to this one BBMD. This is what is shown in the example below with a BAS Router providing BBMD functionality while allowing for foreign device registration from devices attached to the left-most subnet. All the devices on subnet 192.168.1.0/24 must register as foreign devices to the BBMD. If one of these devices needs to originate a broadcast message, it instead sends a directed message to its assigned BBMD which in turn will propagate this broadcast message to all its local attached devices plus all assigned foreign devices. If foreign device registration capability does not exist for all devices on a subnet, an additional BBMD device must be installed on that subnet.  The devices on subnet 192.168.2.0/24 do not have to register as foreign devices because the local BBMD will relay any broadcast messages to registered foreign devices plus any existing BBMDs on the other subnets.

Before the BAS Router can function as a BBMD it must be configured.  A BBMD setup page is accessed by clicking the Advanced button on the BAS Router's main web page.  On the Advanced screen, BBMD is enabled by checking a box.  There are two choices for the BBMD UDP port.  Normally, the BACnet/IP UDP value matches that on the main web page, but an alternate port can be chosen.  All BBMDs must use the same port number – for example BAC0. An Accept FDR box (checked by default) allows foreign devices to register with the BBMD.  But if BBMD is not enabled, FDR is ignored.

Another button accesses the Broadcast Distribution Table (BDT).  On this table, the locations of up to five BBMDs can be entered by specifying their IP addresses and subnet masks.  For this example, there would be no entries because there is only one BBMD. If there were two, each BDT table would have one entry – the IP address of the other BBMD.

Finally, another button gives access to the Foreign Device Table (FDT) which displays all the foreign devices that have registered with the BBMD. In this example there would be five entries – one for every BACnet/IP device on the left-most subnet.

To learn more about the BAS Router, an application guide is available for download. 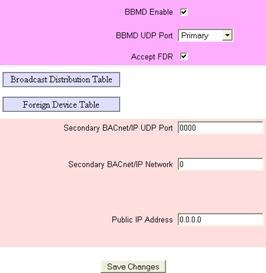 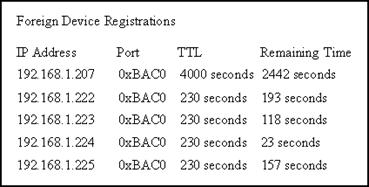 BAS Remote with PoE in a "Cool" Application