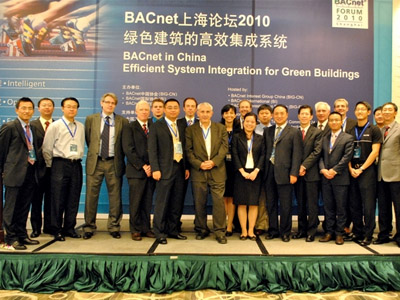 November 2010 - As a member of BACnet Interest Group – China (BIG-CN), Contemporary Controls participated in their 2nd annual forum, this year located in Shanghai, as a gold sponsor. This one day conference, which included exhibits, was held on October 20, 2010 near the Hongqiao airport.

Approximately 150 people attended the event to hear presentations made by representatives from companies such as Siemens, Delta, Reliable Controls and Carrier.  This year's theme was Efficient System Integration for Green Buildings and George Thomas, president of Contemporary Controls, made a presentation entitled Building on BACnet – Connecting Devices to an IP Infrastructure. Although not all devices in a building are BACnet compliant, he recommends that BACnet/IP should remain at the top of the network hierarchy. In order to bring non-complaint devices up to BACnet/IP, gateways are used.  To bring BACnet MS/TP devices up to BACnet/IP, routers are used. Once at the IP level, devices such as routers and Ethernet switches can complete the connections.

During the conference we learned that 467 BACnet vendor IDs from 35 counties have been issued to date demonstrating the worldwide adoption of BACnet.  Many of the presentations involved smart metering and the necessity to monitor and record individual energy use in order to qualify as a green building.  Regardless of the country, reducing energy consumption is a common theme and it was interesting to learn the various initiatives from the different countries.

After the conference there was a meeting of the BIG-CN members.  Discussions involved how best to promote BACnet in China.