A Snowy but Successful AHR Expo 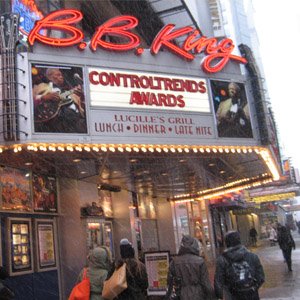 February 2014 - As we all know, extreme winter weather is no problem for the Industrial Controls industry. Even with 11" of snow, the 2014 AHR Expo in New York City had over 61,000 attendees willing to brave the elements to see the latest industry innovations. Our customers were excited to see the newly released BAScontrol20 as well as our new BAScloudVPN remote monitoring service.

Contemporary Controls began the AHR Expo with the entertaining Control Trends Award (CTA) ceremony at the BB King Blues Bar & Grille in Times Square. Our president, George Thomas, received a special recognition for his efforts to educate the HVAC and Industrial Controls industry about IP networks.

"The Control Trends Awards ceremony is one of the most entertaining events in the industry, but it also serves the important function of recognizing the latest innovations and achievements in the HVAC, Controls, and Building Automation Industry," said Mr. Thomas.

In addition to the popular learning resource center on our website, Contemporary Controls has a wealth of educational videos about BACnet®, Sedona Framework® and EIA-485. The videos are available on our website and on YouTube.

At the AHR Expo, the new BAScontrol20 received a lot of attention. The BAScontrol20 is a 20-point field controller with a direct connection to an IP/Ethernet network. Ideally suited for structured wiring systems, the BAScontrol20 is BACnet/IP compliant with a B-ASC device profile. Having a resident Sedona Virtual Machine makes the unit freely programmable using tools such as Niagara or Sedona Workbench.

Customers interested in connecting Modbus networks to BACnet/IP were interested in the easy solution provided by the BASgatewayLX which connects BACnet/IP Ethernet to non-BACnet compliant networks such as Modbus Serial or Modbus TCP. Using the concept of virtual routing, up to 30 Modbus devices appear as individual BACnet devices. Using web pages and a resident database of common Modbus device profiles, Modbus registers can be mapped to BACnet objects. Contemporary Controls provides a library of Modbus device profiles on the BASgateway. Additional custom profiles can be uploaded.

As always, our popular BASrouters were on display at AHR Expo. The BASrouterLX high-performance BACnet router provides stand-alone routing between BACnet networks such as BACnet/IP, BACnet Ethernet, and BACnet MS/TP. With a high-speed processor, it has advanced features such as MS/TP slave proxy support (allowing auto-discovery of MS/TP slaves) and MS/TP frame capture and storage for use with Wireshark®. As a BBMD, up to 50 BDT and 147 FDR entries can be supported. The BASrouterLX has two physical communication ports - a 10/100 Mbps BACnet/IP Ethernet port and an optically-isolated EIA-485 port for MS/TP. Router configuration is accomplished via web pages.

Finally, many customers were interested in hearing about our new BAScloudVPN remote monitoring service that makes it possible to provide secure, remote communication over the Internet by hosting a Virtual Private Network (VPN) server in the cloud.

Learn more about our products online or download our product catalog.

A Snowy but Successful AHR Expo