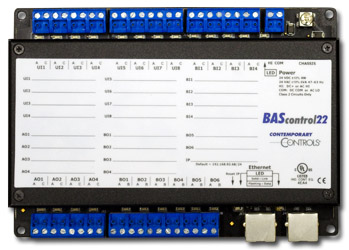 March 2016 - Our BACnet/IP Sedona Unitary Controllers in the BAScontrol series communicate over BACnet, control using Sedona, and are intended for unitary control-dedicated to controlling one zone. Although with Sedona you can communicate over the SOX protocol to a Niagara client, you would be limited to just those clients that support SOX. A more flexible approach is to communicate over BACnet thereby allowing the controllers to operate with BACnet clients from any manufacturer including those who use Niagara. The BAScontrol series is BACnet/IP compliant and uses an Ethernet connection which is also supported by Niagara. BACnet supports discovery of BACnet points which greatly simplifies the populating of BACnet points into the head-end's database-one of the main reasons why we chose BACnet.

The BAScontrol22 complies with BACnet's B-ASC device profile and therefore would be classified as a BACnet server. BACnet servers do not initiate requests to other devices other than an initial I-Am request when first joining the network. BACnet clients initiate requests and expect BACnet servers to respond to requests as data is exchanged. The BAScontrol22 has 22 real I/O points consisting of eight universal inputs (AIs, BIs), four binary inputs (BIs), four analog outputs (AOs) and six binary outputs (BOs) which can be read and possibly controlled by a BACnet client. In addition to real I/O points, the BAScontrol22 supports 24 virtual points (AVs, BVs) that can be configured for analog or binary inputs or outputs. Virtual points are used to accept commands from BACnet clients or provide intermediate data generated by the controllers. How to configure all the BACnet points on the BAScontrol series is the subject of the video Communicating with a BACnet Client in the BAScontrol series.

Contemporary Controls developed custom Sedona components to represent both real and virtual points within the controller. Using a Sedona tool such as Niagara Workbench or Contemporary Controls' Sedona Application Editor (SAE), these components are assembled onto a wire sheet with standard Sedona components as part of the controller's logic. Some configuration is accomplished with the Sedona tool but most of the BACnet configuration is done with a standard web browser. This is all discussed in the video along with demonstrating how Contemporary Controls' BACnet Discovery Tool (BDT), available from download, can be used to simulate the BACnet client. To see BDT in action while learning about the convenience of BACnet discovery of BAScontrol points, watch the video.

Sedona Application Editor-Easier to Use than Niagara Workbench