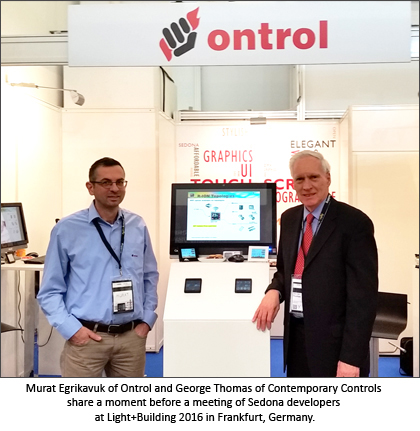 March 2016 - The six-day Light+Building show held in Frankfurt, Germany was again a busy event and with many building automation companies either attending or represented at the event. Murat Egrikavuk of Ontrol based in Turkey felt it was a good opportunity for those companies developing Sedona Framework products to get together and explore if there was a need for a Sedona User's Group. Developed by Tridium, Sedona Framework is an open programming language for field-level control.

What prompted the meeting was Contemporary Controls' release of a Sedona Application Editor (SAE) that was being offered to the Sedona community at no charge. Although Sedona developers know one another, Murat felt that the L+B show offered an opportunity to meet as a group to explore each company's interest in promoting Sedona to the user community. He arranged a meeting location at the L+B show. George Thomas of Contemporary Controls, developed an agenda and invited several companies known for having Sedona products. Not all could attend but EasyIO from Singapore, SysMik from Germany, Global Control 5 from Poland, Ontrol from Turkey and Contemporary Controls from the U.S. did attend. Bar-Tech from Australia could not attend but submitted a proposal for a Sedona API.

The discussions were lively and it was clear that Sedona was important to the companies in attendance. All the companies have some relationship with Tridium or Niagara Framework so Niagara-Sedona integration was an important topic. However, it was recognized that Sedona could operate on its own using a Sedona tool for programming. Although you can program a Sedona device with Niagara Workbench 3.7 and 3.8, there is no support in Niagara Workbench 4. However, Tridium will provide a Sedona SOX driver in Niagara4. SysMik announced that they were acquired by Phoenix Contact and that Phoenix Contact signed a deal at the show with Tridium for Niagara Framework. The discussion of integration was important to SysMik who also announced that their customer, a leading German company, requires a tight integration between Niagara and SysMik's Sedona controllers.

Other topics for discussion had to do with the future of Sedona. It was felt that core Sedona, Sedona in its current form, is stable and adequate for doing control. Although there were comments about some enhancements to Sedona, it was felt that core Sedona should not be changed and that proposed changes-such as a Sedona fork-should be presented to the group for comment and adoption.

The next meeting of the group will be May 15 during the Niagara Summit being held in New Orleans. Tridium management has been invited so that the group can fully understand Tridium's position on Sedona and what support can be provided to this group of dedicated Sedona developers.

Sedona Application Editor-Easier to Use than Niagara Workbench