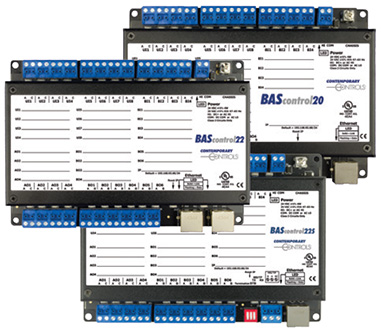 January 2017 - During AHR Expo 2017 in Las Vegas, Contemporary Controls will be featuring our expanded BAScontrol Series of BACnet controllers that can be freely programmed using a Sedona Tool like Niagara Workbench or Sedona Applications Editor (SAE).

"The BAScontrol Series has been very popular with our customers looking for a controller that supports both BACnet/IP and Sedona Framework (SOX) protocols via an Ethernet connection," said Joe Stasiek, Sales Manager. "The new controllers we added to the series share the same common core of features and differ only by I/O count or network connections."

In addition to BACnet server compliance (B-ASC), all BAScontrollers have a common core of Sedona components - 68 from Tridium Sedona 1.2 release, and 88 from Contemporary Controls. Using a Sedona tool, components are placed onto a wire sheet, configured, and then interconnected via links to create an application. Program changes are immediately realized speeding commissioning. Contemporary Controls has developed components that pass wire sheet data to web browsers or BACnet clients for increased functionality. Now a new component called the NetV provides BACnet client functionality to any BACnet/IP or BACnet MS/TP server device thereby allowing a Sedona wire sheet on a BACnet client to drive inexpensive BACnet remote I/O devices distributed through a plant or building.

The BAScontrolZ has much the same functionality as the BAScontrol22S having one Ethernet port and one MS/TP port except it has no I/O. Instead it gains BACnet client functionality to drive both BACnet/IP and BACnet MS/TP server I/O devices by incorporating the new NetV component. For convenience, Contemporary Controls has developed custom Sedona components to handle both Metz Connect Cube I/O and Functional Devices RIB MS/TP I/O. For other devices, multiple NetV components can be used instead. The BAScontrolZ is a compact fully-featured Sedona controller that can be adapted to a host of remote I/O devices that lack the ability to execute programs.