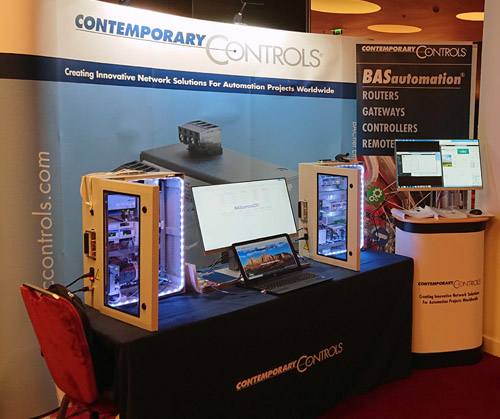 Contemporary Controls has participated in several events this past month, promoting our concept of open control and the products that support that concept.

At Haystack Connect 2019, our engineers participated in two general sessions that addressed some of the issues facing owners and operators trying to manage the data generated from building IoT devices. Haystack Connect promotes the mission of Project Haystack, which aims to define a methodology and common vocabulary so that models of building systems and smart devices can be interpreted automatically by a variety of software and web-based applications.

At our booth, we showed Haystack server and tagging on the physical and virtual points on the BASpi controllers. The BASpi I/O board is a 12-point BAS expansion board for Raspberry Pi. The I/O board, plus the firmware files provided by Contemporary Controls turn your Raspberry Pi into a BACnet-networked, Sedona-programmable controller with 6 Universal Inputs and 6 Relay Outputs.

The new BAScontrol22C with BACnet client capability was popular with the Haystack crowd. "The BAScontrol22C gives users the ability to access point values and/or control other BACnet devices in the network," said Zach Nestov, Product Specialist. "The points obtained over the BACnet network can be used in the BAScontrol22C's Sedona wire sheet application logic, become scaled, calculated, and/or converted to different data types, written to other BACnet devices, served up to BACnet supervisory controllers and operator workstations by using Virtual Components, as well as be monitored, displayed, or exposed for configuration on BAScontrol22C's web page by the use of Web Components."

CONTROLS-CON gave Contemporary Controls the opportunity to unveil several products that will be released in 2019. "Trade shows are a great opportunity to hear from our customers about the latest challenges in the field," said Zach. "The CONTROLS-CON attendees were some of the first customers to see these new developments."

New products included the EIWR, which brings WiFi capabilities to our Skorpion series of IP routers, and the EICR, which will join the VPN router family, expanding the capabilities of the RemoteVPN service.

The Niagara Forum 2019 showcases open systems and the opportunities offered by the IoT. Contemporary Controls is a long-time supporter of open systems. Our BAScontrol and BASpi products are popular with the Niagara crowd because they leverage the strengths of Sedona and BACnet.